The mystical Wakanda Village of the “Black Panther” movie by Marvel Comics of Marvel Worldwide Inc is about to manifest at Hemang in the Afigya Kwabre District of the Ashanti Region.

The Chief of the town, Nana Appau Wiafe Ababio Sanwansa, has donated four plots of land to the Journey Sistahs, a group of 14 Africa Americans, who have seen Hemang as their home and seek to settle in the community.

At a ceremony last Wednesday, during which members of the group, led by Makresha McFashion Reneau (now christened Akosua Abrafi Koto), were assigned African names and clans typical of Ghanaian tradition, Nana Sanwansa said the parcel of land would enable the group to establish a community of their own, and help their brothers and sisters out of poverty and deprivation. 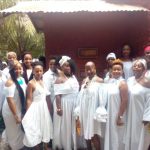 The Chief said the mystical Wakanda Village is the corrupt form of ‘Wa ka no dada’ loosely translated as ‘It had long been destined’ that they would settle in a settlement of that sort, and, therefore, preferred that the new settlement be named as ‘Wakanda (Wa ka no dada) Village’ for their occupation. 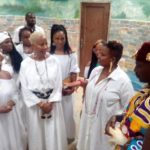 Nana Appau Wiafe Ababio Sanwansa, who, with Madam Dawn Sutherland, a philanthropist and Executive Director of Bridge-To-Africa Connection, Inc., is hosting the Journey Sistahs from Georgia, Arizona, Philadelphia, New York, California and Atlanta among others, urged the African Americans to come back home and team up with Africans to develop Africa. 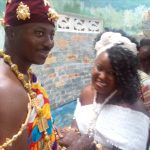 He noted that blacks have the divine potential to develop. and called for unity among all people of black descent to shrug off forces that inhibit their development. 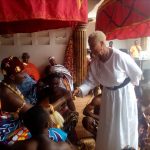 The Hemang Chief noted that with great Kings like the Asantehene present, their dream of coming back home would be fruitful, as he is prepared to welcome African Americans ready to invest in Africa and Ghana, particularly the Ashanti Region, to make a difference. 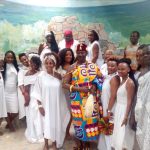 Nana Sanwansa reiterated the call by Otumfuo Osei Tutu II, the Asantehene, on Africans in the the Diaspora to commit part of their resources, expertise and experience to bear on the country’s development towards socio-economic development. 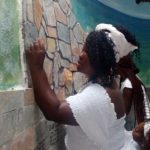 He said once they had identified their roots, they should not neglect it, but take advantage and help in the development of Africa.

After the naming ceremony by the New York-based Ausar Ausef Society, led by Bonsu Boateng, the 14 African Americans visited the Hemang Ancestral Memorial Home and Tourist Centre, where they meditated and signed their names on the Wall to mark their visit. 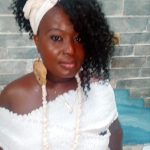 No sooner had they left the Ancestral Home, then the heavens opened and rains set in, compelling them to stand in the rains.

Overwhelmed by the events, Makresha said the rains signified they had been accepted by their ancestors back home, amid tears.

The Journey Sistahs are championing the return of Africans born outside Africa to return to invest and live and work with their Africa brothers and sisters to rebuild the Continent.

The visit to Ghana is Makresha’s third, during which her group, Journey Sistahs, embarked on projects in Hemang after the trailblazer, 11-year-old American philanthropist Khloe Thompson, whose Khloe Kares Foundation donated a borehole to the Hemang Roman Catholic Primary School recently.

About seven projects in the Ashanti Region being undertaken by the Journey Sistahs, estimated to cost US$90,000, which include the donation of 500 pairs of shoes and 2,000 underwear to school pupils at Hemang a donation of 250 desks to schools at Hemang and Atasemanso in Kumasi, and painting inside and outside of classrooms at Hemang.

It also provided solar lights, flashlights and key chain lights to students and teachers of the two schools, and library books.

They come under the group’s ‘Shoes that Touch the Soul’, ‘Desks for Champions, and ‘Shining the Light’ projects.

On Friday, the group provided books for the library project for the Atasemanso R/C Primary School, in which they installed bookshelves and two fans and air conditioned.

Last Saturday, the group also visited Mampong Bunuso where it provided items for women and children, and assessed the needs of the community for future missions.

Makresha explained the idea of bringing the group to Ghana in that it would encourage the members to make a difference and help change lives in Africa.