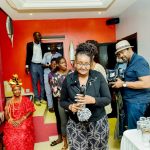 About 50 African-American tourists visited the palace of the Oba of Benin, His Royal Majesty, Omo n’Oba n’Edo, Uku Akpolokpolo, Ewuare II, during a trip to the Edo State capital to trace their ancestral roots.

The Benin monarch expressed joy that many African-Americans were doing well in their respective fields of endeavour.

The visitors were led to the palace by the Edo State Commissioner for Arts, Culture, Tourism and Diaspora Affairs, Osemwengie Ero.

He expressed satisfaction with the group for their decision to trace their ancestral home after the abolition of the slave trade.

Oba Ewuare ll told his guests that as a student in New Jersey in America, he had a first-hand experience of what racism, oppression and deprivation were and thanked God that they all survived the ordeal.

He however described as unfortunate that modern-day human slavery in the form of human trafficking and prostitution were still going on in the world today.

He, therefore, charged the African-American group to collaborate with Oba Ewuare II Foundation in its determined effort to eradicate the scourge from the society.

A representative of Jemi Alade, organisers of the tour, Mr. Andy Ehanire, in an interview with journalists, said the Americans were on a rediscovery visit to trace their route.

He added, “They are coming on a pilgrimage to rediscover the home of their ancestors from where they were taken away more than 400 years ago. It is an emotional visit.”

Reacting, the leader of the African-Americans​, Betty Arnold, said they were very happy to re-establish a link with the people of Benin Kingdom.

She added that they were also in Benin to learn about their cultural heritage, as some of them have been able to trace their ancestry to Benin through DNA analysis.

This website uses cookies to improve your experience while you navigate through the website. Out of these, the cookies that are categorized as necessary are stored on your browser as they are essential for the working of basic functionalities of the website. We also use third-party cookies that help us analyze and understand how you use this website. These cookies will be stored in your browser only with your consent. You also have the option to opt-out of these cookies. But opting out of some of these cookies may affect your browsing experience.
Necessary Always Enabled

Any cookies that may not be particularly necessary for the website to function and is used specifically to collect user personal data via analytics, ads, other embedded contents are termed as non-necessary cookies. It is mandatory to procure user consent prior to running these cookies on your website.